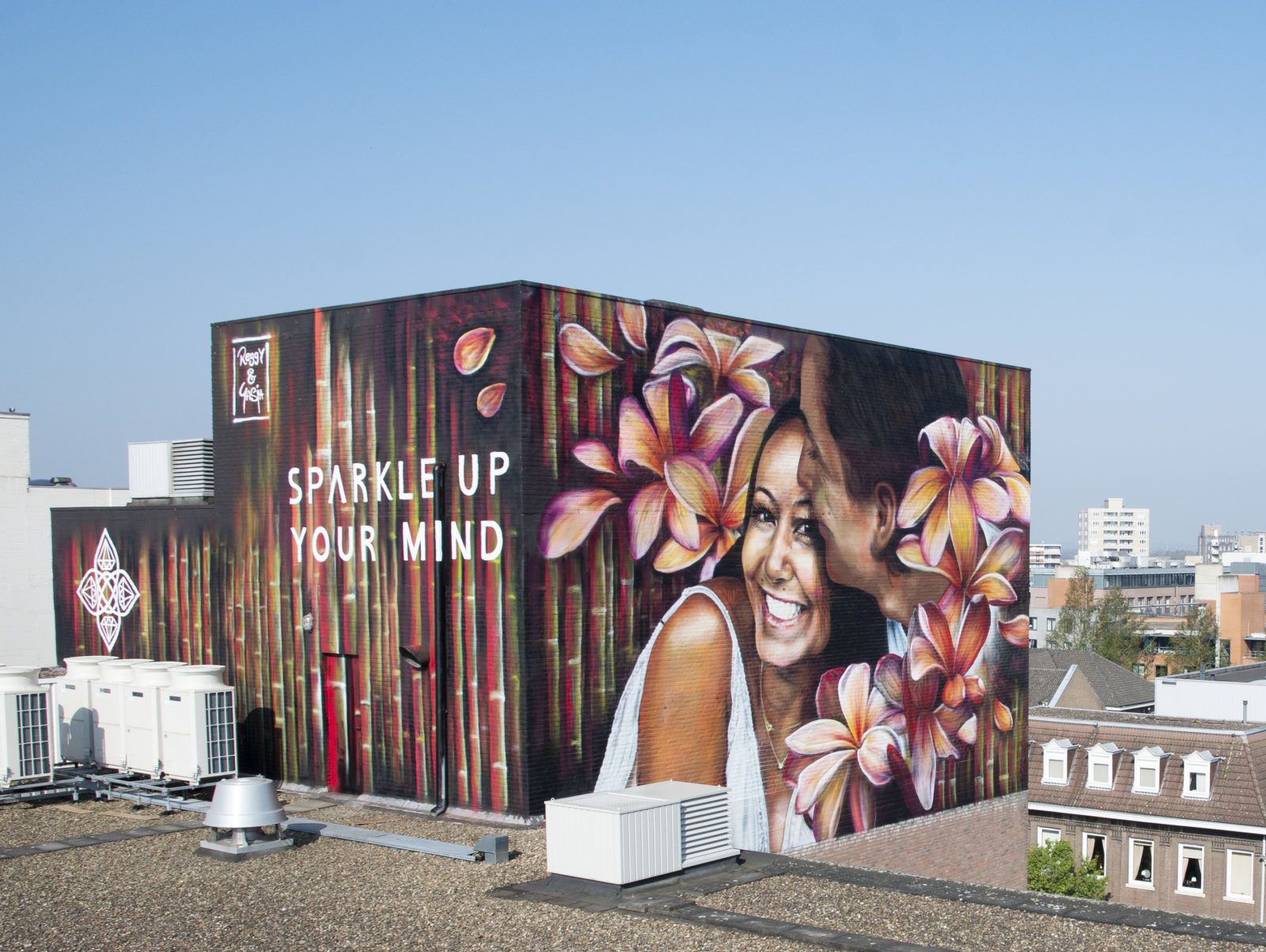 The Corona virus (COVID-19) brings the fearful feeling of potentially living with a deadly infection close to all of us. No less than 14% of women are aware of this feeling: they get breast cancer. Breast cancer recurs in metastatic form in a third of these women. And 73% of these women are no longer alive five years after diagnosis. Those percentages are too high: more research is needed on metastatic breast cancer.

To draw attention to this, an immense mural from the Sparkle Up Your Mind Foundation has been erected, at a height of 30 meters in the city center of Heerlen.

The aim is to make people aware of the need for more research into metastatic breast cancer and to raise funds for it.

Lianne responded on March 2 when she saw the design:
“It looks beautiful. This is exactly what we need. ”

Sparkle Up Your Mind Foundation

Lianne Ritzen-Grootings, founder of the foundation (www.sparkleupyourmind.com), is depicted on the mural. Lianne was diagnosed with breast cancer in 2015. After chemo, radiation, amputation, reconstruction and hormone therapy, she was declared cured, hearing in 2017 that the disease had returned as metastatic breast cancer. Lianne carried this burden with positive energy for everyone in her immediate environment and for fellow sufferers around the world. She found that many people are unaware that with 1 in 3 women breast cancer returns, often in an incurable form. When she discovered that there are still many unanswered research questions about metastatic breast cancer, raising funds for more research became her life’s mission. In 2017 she founded the Sparkle Up Your Mind Foundation with her husband and friends, named after the mindset of Lianne. Friendly entrepreneurs took the initiative for the mural and Lianne responded on March 2 when she saw the design: “It looks beautiful. This is exactly what we need. ” On March 3, Lianne died at the age of 37 from the consequences of metastatic breast cancer.

The artists – and their experience with breast cancer

Breast cancer is ubiquitous. Artists Reggy Bruine de Bruin (49) and Yasja Ligtelijn know all about this. As mother and daughter, they are responsible for the design and execution of the mural. Reggy Bruine de Bruin is among the 14% of women who get breast cancer. After diagnosis in 2014, she underwent chemo, mastectomy, hormone therapy and reconstruction. During the recovery phase, Reggy noticed that painting gave her peace, after which she decided to study at the art academy in Belgium. This resulted in several exhibitions, of which she invariably donates half of the proceeds to the Cancer Research Fund Limburg. Yasja Ligtelijn: “This is a special assignment for us, because we feel closely connected to the purpose of the mural. While we were working together it was a moving thought that Lianne’s husband Paul and her two sons Oscar and Tygo would see the result. That motivated us to give everything. With the mural – in the spirit of Lianne’s positive mindset – we want to inspire the audience to stay positive in the most difficult times. We could not have foreseen that this message would turn out to be so topical now that the Corona virus has dominated everyday life.

The mural was created by Brasserie Mijn Streek and the Sparkle Up Your Mind foundation in close collaboration with the Getting Up foundation. The mural is clearly visible from the brasserie on the top floor of the Schunck building in the city centre of Heerlen.

Donations to the Sparkle Up Your mind foundation for research into metastatic breast cancer can be made via www.sparkleupyourmind.com.

You can find images of the mural here: Highres photos Mural

This website uses cookies to improve your experience while you navigate through the website. Out of these cookies, the cookies that are categorized as necessary are stored on your browser as they are essential for the working of basic functionalities of the website. We also use third-party cookies that help us analyze and understand how you use this website. These cookies will be stored in your browser only with your consent. You also have the option to opt-out of these cookies. But opting out of some of these cookies may have an effect on your browsing experience.
Necessary Always Enabled
Necessary cookies are absolutely essential for the website to function properly. This category only includes cookies that ensures basic functionalities and security features of the website. These cookies do not store any personal information.
Non-necessary
Any cookies that may not be particularly necessary for the website to function and is used specifically to collect user personal data via analytics, ads, other embedded contents are termed as non-necessary cookies. It is mandatory to procure user consent prior to running these cookies on your website.
SAVE & ACCEPT